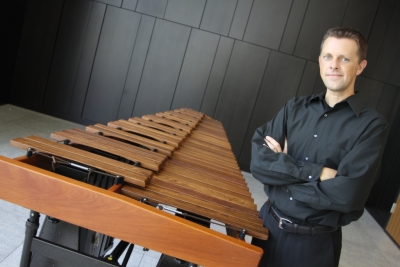 Dr. Brian Zator is the Director of Percussion at Texas A&M University-Commerce and Immediate Past-President of the Percussive Arts Society. At A&M-Commerce, he coordinates all percussion activities including Percussion Ensemble I, II, & III, Drumline, "Panimation" and Pan2 Steel Drum Bands, “Samba LeÁ£o” Brazilian Ensemble, undergraduate and graduate applied lessons, and the percussion methods and literature courses. He earned his Bachelor of Music Education degree from Baylor University, Master of Music degree from the University of Michigan, and his Doctor of Musical Arts degree from the University of North Texas. He is also a student of world-renowned marimba artist, Keiko Abe, having performed and studied with her in Japan.

As a marimba/percussion soloist or ensemble director, Dr. Zator has performed at seven Percussive Arts Society International Conventions (PASIC), the Texas Music Educators Association Convention, the Texas Bandmasters Association Convention, the College Band Directors National Association Convention, the North Texas Keyboard Percussion Symposium, as well as abroad in China, Brazil, Japan, Australia, Switzerland, Argentina and Luxembourg. He has been a soloist with groups such as the Lone Star Wind Orchestra, the University of North Texas Wind Symphony, the Baylor Woodwind Quintet, the A&M-Commerce Wind Bands, the Conroe and The Woodlands Symphonies, and with college and high school percussion ensembles around the country. He made his Carnegie Hall debut with the A&M-Commerce Wind Ensemble in the spring of 2012.

Dr. Zator and the A&M-Commerce percussion ensemble were one of the three winners of the 2010 PAS International Percussion Ensemble Competition and performed a showcase concert at PASIC 2010. In 2012 they released “Epic Proportions,” featuring music from their showcase concert. The ensemble also presented a concert at PASIC 2006 featuring works of Minoru Miki and in 2007, released a CD entitled “Sohmon III: New and Unknown Percussion Works of Minoru Miki.”

Dr. Zator has two solo CD's released on Equilibrium Records: “Zamiki: Music for Solo Marimba” and a chamber-works CD entitled, “Zoomorphs”. He is the author of the method book, "Keyboard Fundamentals with Play-Along Tracks", published by Innovative Percussion. He is also the author and performer on several iBook publications providing detailed video instructions and full-length performances for popular marimba solos including Yellow After the Rain, Rain Dance, Sea Refractions, and The Tempest. He was a member of The Cavaliers Drum and Bugle Corps and taught the University of Michigan drumline. Active within the Percussive Arts Society (PAS), he currently serves as Immediate Past-President on the Executive Committee and Keyboard Editor for Percussive Notes. He has also served on the PAS Board of Directors, the Keyboard and Percussion Ensemble Committees, written reviews for Percussive Notes, and has adjudicated the PAS International Percussion Ensemble, Composition, and Solo Marimba competitions. Dr. Zator is proud to be a performing artist and clinician for Innovative Percussion, Evans, Sabian, and Black Swamp.